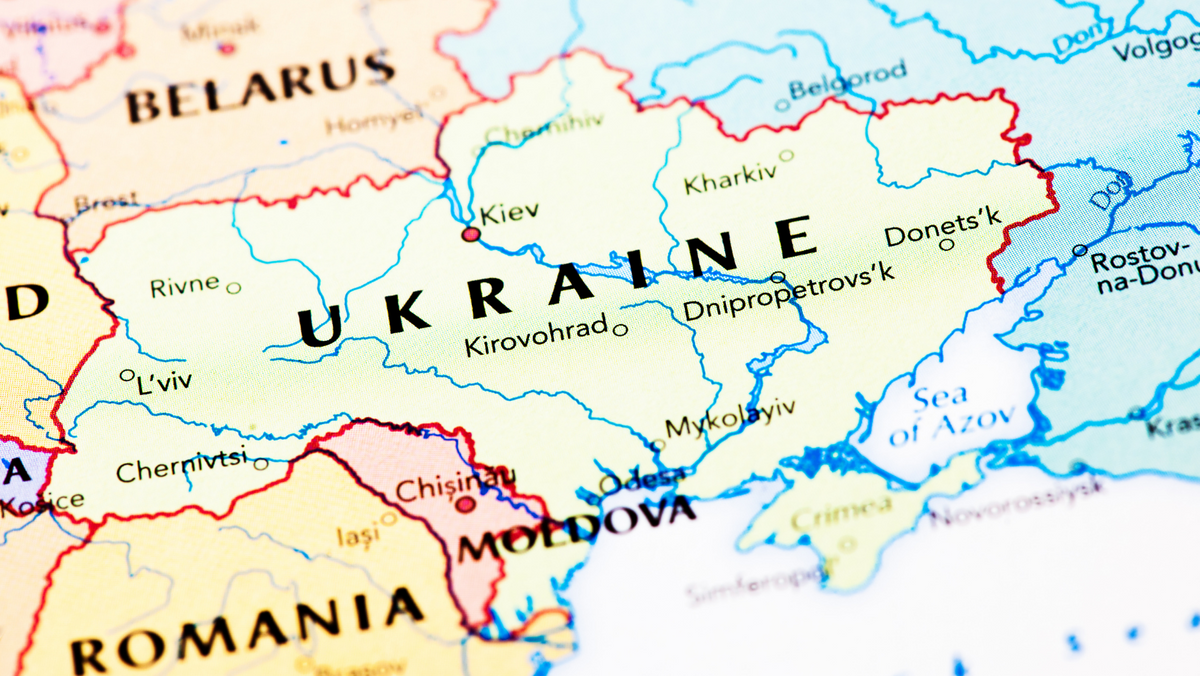 The current Russia-Ukraine conflict is essentially another one of many armed conflicts in history. As you can see, the blue line is the number of armed conflicts, and the orange line is the S&P 500 index. If history repeats itself, the stock market's long-term trend is not likely to be altered by the current conflict. 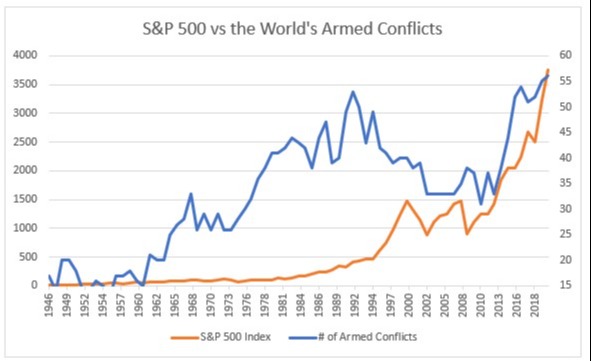 A Brief History of Ukraine:

Geographically, Ukraine is at the junction of Eastern Europe and Western Europe. Furthermore, it’s the intersection of Catholicism and Orthodox Christianity, determining the importance and challenges of Ukraine's geopolitics.

Since the 1570s, Ukraine has been the battleground of the Polish–Lithuanian Commonwealth and Russia. In 1654, Ukraine formed a military and political alliance with Russia and claimed loyalty to the Russian tsar. Various forces, however, have repeatedly contested the Ukrainian region for centuries and eventually formed a division similar to that of today's Eastern and Western Ukraine. Eastern Ukraine believes in the Orthodox and has a high degree of identification with Russia; while most of Western Ukraine believes in Catholicism and does not identify so much with Russia. Despite the fact that Ukraine was united during World War II and claimed independence after the collapse of the Soviet Union, the ideological division between the regions remains.

The History of the Ukraine-Russia Conflict:

Following the alliance of Ukraine and Russia in 1654, Russia adopted a Russification approach in Ukraine. Russia migrated a large number of Russians to the Ukrainian region. It inhibited the development of Ukrainian national cultures, prohibiting the publication of Ukrainian books and teaching of the Ukrainian language. Presently, native Ukrainians account for the majority of the total population, mainly in the central and western states. On the contrary, Russians account for the minority, mainly in the southeastern states.

In the 1930s, many Ukrainians were persecuted during the Great Purge campaign. Also, it is believed that more than 2 million have suffered from various diseases as a result of the Chernobyl disaster in 1986.

Considering Ukraine's population is only about 40 million, Russification measures, famine, purges, and nuclear leaks resulted in Ukrainian hatred toward the Soviet Union.

The entanglement of interests hidden between Russia and other countries is much bigger than the conflict within Ukraine. While the European Union wants to expand to the east to achieve geopolitical stability and further economic prosperity, Russia has been trying to revive its superpower status since President Putin came to power. Nonetheless, Russia and the EU are economically dependent and have been very cautious about geopolitics. Another power entangled in the conflict is NATO (North Atlantic Treaty Organization), which involves the United States.

Currently, nearly 40% of the EU's natural gas comes from Russia. Eighty percent of that supply must channel through Ukraine. There are proposed pipeline projects in talk between Russia and Germany for direct natural gas transportation. In turn, these projects would imply significant geopolitical and economic impacts. Thus, the evolvement of the Ukraine-Russian conflict could alter the future development of natural gas projects.

The million-dollar question is to predict the outcome of current tension. Hopefully these these perspectives can assist in drawing some ideas.

No one can predict how each party will operate from here; but if we view this case from a long-term perspective, things are more clear.

While we stated logical, assuring reasoning above, the market appears uneasy regarding headlines around the conflict. Potentially, this is due to the Fed’s urge to raise interest rates if energy prices jump as a result. Combined with some endogenous economic problems, the economy could potentially face some challenges. However, we hold our view that the market will calm down once Fed announces its first rate hike.

We hope you find this analysis helpful as you continue to follow the market’s performance. Please contact your advisor to discuss questions specific to your investment portfolio.

No strategy assures success or protects against loss.

The opinions voiced in this material are for general information only and are not intended to provide specific advice or recommendations for any individual.

All performance referenced is historical and is no guarantee of future results.

The economic forecasts set forth in this material may not develop as predicted and there can be no guarantee that strategies promoted will be successful.

The S&P 500 Index is a capitalization-weighted index of 500 stocks designed to measure performance of the broad domestic economy through changes in the aggregate market value of 500 stocks representing all major industries.

All indices are unmanaged and may not be invested into directly. Investing in mutual funds involves risk, including possible loss of principal.

Fund value will fluctuate with market conditions, and it may not achieve its investment objective.

ETFs trade like stocks, are subject to investment risk, fluctuate in market value, and may trade at prices above or below the ETF's net asset value (NAV).

Upon redemption, the value of fund shares may be worth more or less than their original cost.

ETFs carry additional risks such as not being diversified, possible trading halts, and index tracking errors.