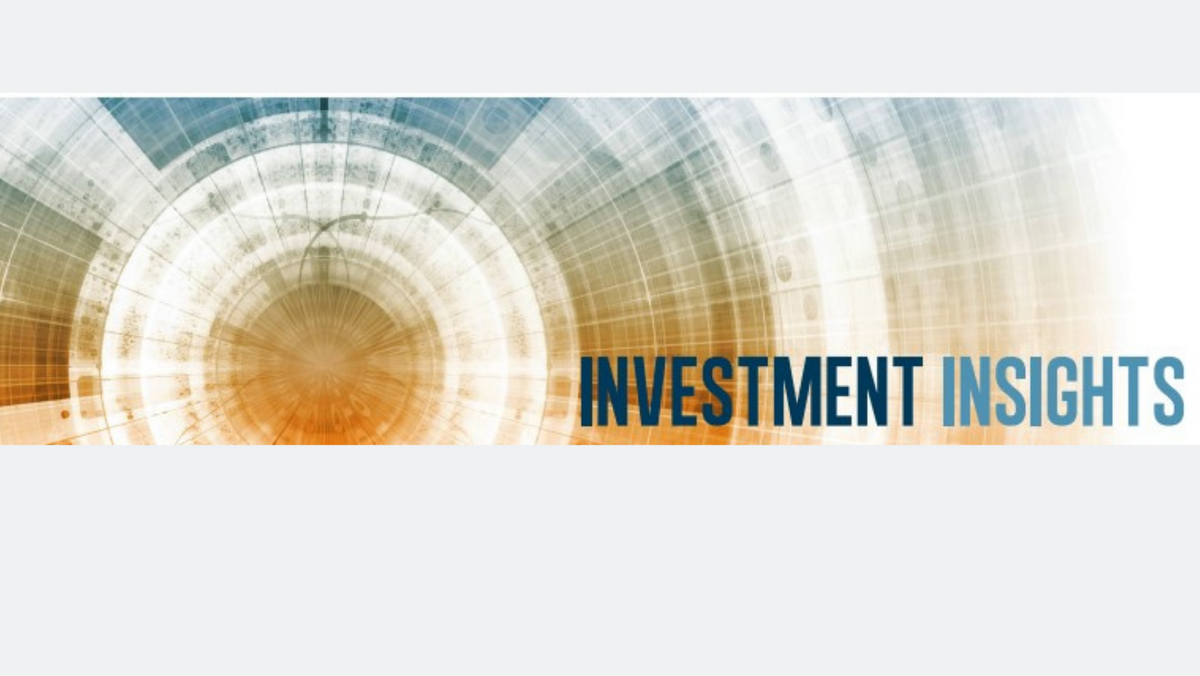 IS THE ECONOMY HEADED TOWARD A RECESSION?

Recently, fears of a recession have increased as many market participants worry that high inflation and potential overheating of the economy will require the Federal Reserve (Fed) to slow its accommodative policies too quickly. In this issue of Investment Insights, we examine the outlook for the U.S. economy.

Financial conditions play an essential role in supporting economic growth by facilitating the flow of funds between savers and investors. Consider the example of two individuals, Christine and Adam. Christine works, makes more than her expenses, and wants to save some income. Adam has a great business idea but does not have the funds to start. Christine can finance Adam’s business idea and charge Adam an interest rate. The actual financial markets are considerably more complicated than this example with only one interest rate. There are also a larger number of savers and investors in the economy. The Fed influences the prevailing interest rates in the economy to help facilitate economic growth.

During the pandemic shutdown, the Fed set the short-term rate close to zero to encourage economic activity and lower unemployment. These loose economic conditions helped the economy recover quickly and move unemployment to the lowest levels in decades. These low levels of unemployment indicate that the Fed’s first mandate of full employment is complete. The inflation rate, which is the Fed’s other mandate, is well above its target. Thus, the Fed is currently on the path toward raising interest rates. The rising interest rates have the opposite effect and typically slow economic activity, encouraging savings instead of investing. 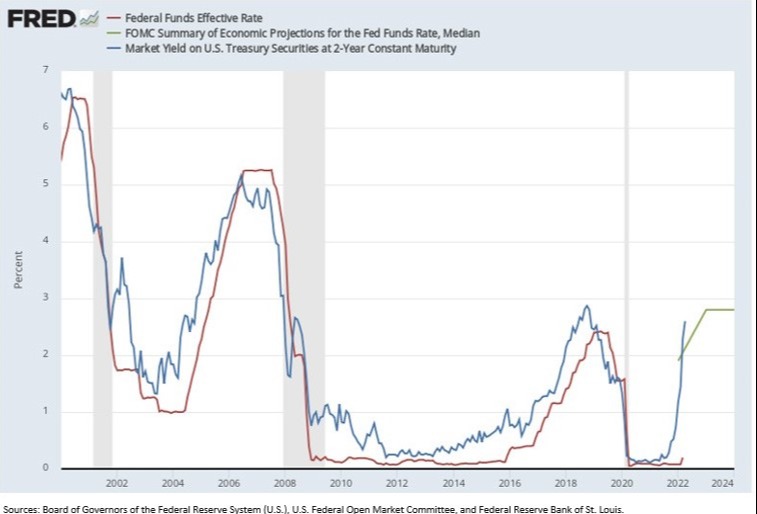 The largest component of the U.S. economy is household consumption, which makes up more than two-thirds of the economy. As such, consumers are a major driver of the economy, and their strength typically means a strong economy. The consumer’s strong position is evident in the current labor and consumption trends.

A prerequisite for the consumption of goods and services is the ability to do so.

That’s why the labor market’s strength is important in driving consumption. In March, the unemployment rate fell to 3.6%, near the pre-pandemic 50-year low of 3.5% in February 2020.1  Last month, there were more job openings than the number of people unemployed.2  Furthermore, people are also beginning to jump back into the labor force. The labor force participation rate ticked up to 62.4% in March 2022 from 61.5% in March 2021. The unemployment rate is likely to fall again, as suggested by declining weekly initial and continued unemployment claims since the start of the year. Another important factor determining consumers’ ability to spend is their credit card debt. The total consumer credit has expanded since the Covid recession, and the delinquency rates on credit card loans are the lowest in decades thanks to strong consumer balance sheets.3 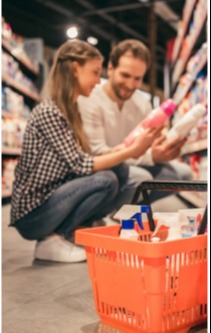 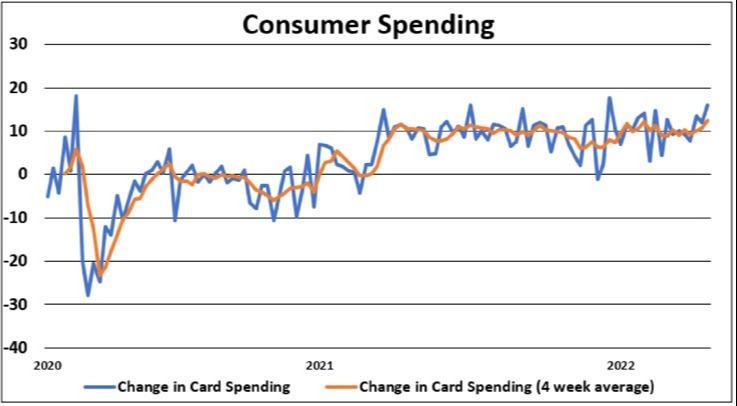 The second-largest component of the U.S. economy is business investments. Business investments typically make up 15-20% of the economy.4  Examples of activities within this category include nonresidential construction, equipment production, changes in inventories, etc. While this component of GDP is smaller than consumption, it is still very important for economic growth. Business investments are viewed as an indicator of the future productivity of an economy. For example, not long ago, many grocery stores relied on physically counting inventory. Many of these businesses invested in inventory management systems to make their employees more productive. Today, most stores no longer physically count inventory, saving their employees time for more productive tasks.

Overall, business activity has been strong this year. According to the Institute for Supply Management, the manufacturing sector grew in March for the twenty-second consecutive month.5  Nine out of the 11 manufacturing metrics tracked reflected a growth trend. Furthermore, four out of the five regional business surveys conducted by Federal Reserve Banks showed that manufacturing activity grew for the third month. 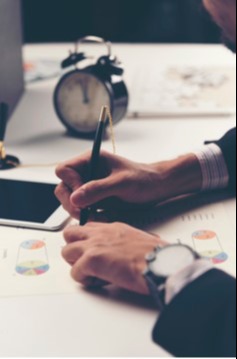 In the near future, business investments are expected to increase. A survey of 175 CEOs found that 96% of them expect their capital spending to increase or remain the same over the next six months.6  This trend is shown in the graph below. Values above 50 indicate that more CEOs expect to increase their capital spending over the next six months versus decrease it. Due to rising interest rates, tightening financial conditions may negatively impact business investment decisions, which currently show strong trends. 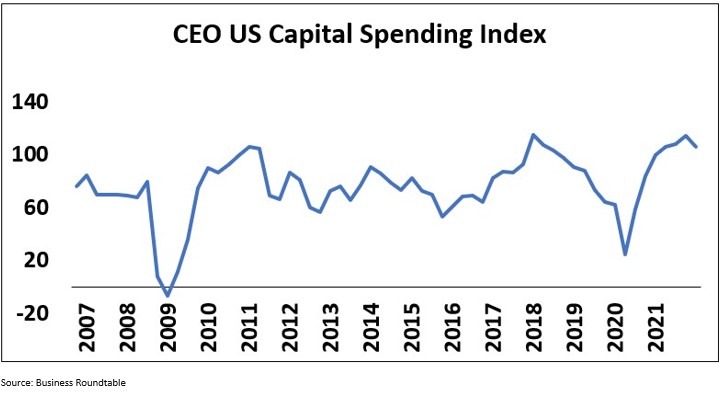 Opinions are divided regarding if the U.S. economy is headed toward a recession in the near term. Some economists see a rising risk of recession over the next year.7  Strong consumer trends and business activities, however, suggest that a U.S. recession is unlikely in the near future without aggressive Fed action. The expected Fed actions are unlikely to halt economic growth this year. As of now, financial conditions are expected to change from accommodative to neutral. Thus, the main risks to economic growth are the Fed tightening financial conditions quicker than projected or raising rates beyond current projections.

This report was prepared by Khurram Naveed